A chawan (茶碗; literally “tea bowl”) is a bowl used for preparing and drinking tea. There are many types of chawan used in East Asian tea ceremonies. The choice of their use depends upon many considerations.

The chawan originated in China. The earliest chawan in Japan were imported from China between the 13th and the 16th century.

The Jian chawan, a Chinese tea bowl known as Tenmoku chawan in Japan, was the preferred tea bowl for the Japanese tea ceremony up until the 16th century. In Japan, tea was also mainly drunk from this Chinese variety of tea bowls up till about the 15th century. The Japanese term tenmoku is derived from the name of the Tianmu Mountain, where Japanese priests acquired these tea bowls from Chinese temples to bring back to Japan according to tradition.

An 11th-century resident of Fujian wrote about the Jian tea wares: “Tea is of light colour and looks best in black cups. The cups made at Jianyang are bluish-black in colour, marked like the fur of a hare. Being of rather thick fabric they retain the heat, so that when once warmed through they cool very slowly, and they are additionally valued on this account. None of the cups produced at other places can rival these. Blue and white cups are not used by those who give tea-tasting parties. ”

By the end of the Kamakura period (1185–1333), as the custom of tea drinking spread throughout Japan and the Tenmoku chawan became desired by all ranks of society, the Japanese began to make their own copies in Seto (in present-day Aichi Prefecture). Although the Tenmoku chawan was derived from the original Chinese that came in various colors, shapes, and designs, the Japanese particularly liked the bowls with a tapered shape, so most Seto-made Tenmoku chawan had this shape.

With the rise of the wabi tea ceremony in the late Muromachi period (1336–1573), the Ido chawan, a variety of Korean bowls mainly used for rice in Korea, also became highly prized in Japan. Korean bowls were a favourite of Sen no Rikyu because of their rough simplicity.

With time and development of the Japanese tea ceremony as a distinct form, local ceramics became more priced and developed. Around the Edo period, the chawan was often made in Japan. The most esteemed pieces for a tea ceremony chawan are Raku ware, Hagi ware and Karatsu ware. There is a saying in the tea ceremony schools for the preferred types of chawan: “Raku first, Hagi second, Karatsu third.”

Another chawan type that became slightly popular during the Edo period from abroad was the Annan ware from Vietnam, which were originally used there as rice bowls. Annan ware is blue and white, with a high foot. 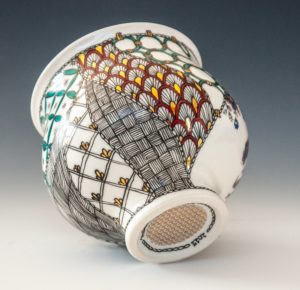 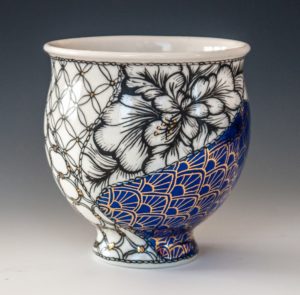 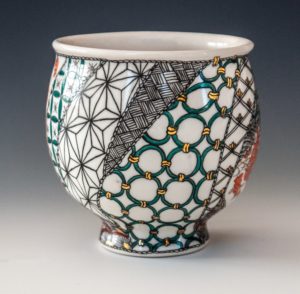 Melanie Sherman is a ceramic artist. In her ceramics she combines her love for ornamentation and her fascination with the history of ceramics.
Instagram
Short Monday video of a few days' of work. This pi

Today a short video on how I use old vintage decal

Really loving this duo of greens, one lighter, one

Painting some small moths on small pieces of porce

Archive
Popular posts
We use cookies on our website to give you the most relevant experience by remembering your preferences and repeat visits. By clicking “Accept”, you consent to the use of ALL the cookies.
Cookie settingsACCEPT
Manage consent